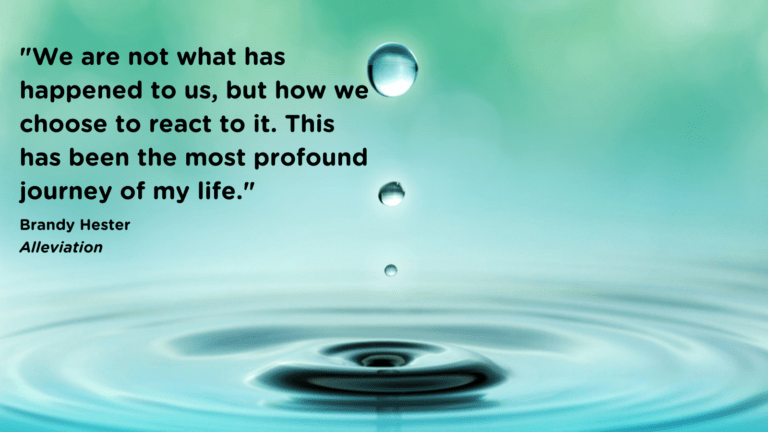 Do you have an old injury that lies dormant most of the time? Then in a rush one morning, you move the wrong way, and feel it resurface? You take it easy for a few days, and give it some TLC, to find that it eases back into an easily forgotten thing; that will once more lie dormant, until you inadvertently move the wrong way again, and see the process repeat. I have recently found this is the exact same thing that happens with trauma, grief, and loss. Healing, of any sort, is not a linear process.

From the time that I was seven years old, people would tell me that I had an “old soul” or was “mature for my age.” Then, I thought it was a compliment. It meant I was doing my job effectively. I learned from a very young age to be “on” all the time. I also learned to lie effectively. It was threaded into the very core of my personality to be guarded, and not let anyone get too close to me. I was pleasing, and I learned to acclimate to any environment I was in. I was groomed to be the caretaker of those around me. This meant that outside of those relationships, I could not form any real attachments to the kids my age. Therein, missing much I was supposed to learn during those formative years.

Life went on. I grew up and got married. I finished college, and started a career. I took trips, and posed for “happy” photos with friends. I had a cute place on the lake, nestled beautifully in the mountains. From the outside looking in, I had it all. For this reason, I constantly told myself that I should be happy. I thought that if I said it enough, I would believe it. That worked well, until it didn’t. The thing about lying, especially to yourself, is that when the truth comes to light, it shatters every illusion you’ve worked so diligently to keep in place. It seemed my self imposed illusions outweighed my reality, by a mile.

In an instant, every truth I attempted to bury, had risen to the surface, and the only options I had were to face them, or let them consume me. I admitted I was in a marriage that neither of us wanted to be in. I left my career without a second thought. I came out as gay. I stopped taking the trips I did not want to take. I stopped pretending to be happy, when I was not. More than any of that, though, I realized that I was truly alone. I had gotten so good at alienating myself, that I had backed myself so far into a corner where love could not touch me, even it wanted to. I began to see patterns repeating in my life. Mostly that I hurt people, trying to protect myself from the possibility of getting hurt. They loved me, but I could not accept it. I did not feel worthy of it.

This went on for years more, until someone told me a truth, I had desperately needed to hear. “Trauma is held in the body. Just like a physical injury, the damage can be repaired, but it will always be there.” The power of that statement was the one that led me to therapy. Therapy led me to a list of diagnoses that made my life make sense. Those diagnoses led me to understand that healing is not linear. We are not what has happened to us, but how we choose to react to it. This has been the most profound journey of my life. I see progress, daily – and I am thankful for that. It doesn’t mean that dark days don’t fall upon me; I just, now, have a box of tools that help me more easily navigate them. I cannot tell you the exact moment I chose to #LevelUp, but I can tell you that once you start, you will not ever want to stop. Here’s to a better you, and a better me, making this world a better place. Back to back. Together we can.

The views and opinions expressed in this article are those of the author and do not necessarily reflect the official views of Create Change or its affiliates.

This site uses Akismet to reduce spam. Learn how your comment data is processed.

Another incredible thought provoking piece to read. Thank you so much for writing this. I’m glad, despite the hurdles still present, you’ve found tools to dismantle them, rather than try to jump over them and falling.
I’ve no doubt I will read this again when I need to be reminded of the message you give.
Take care.

Thanks so much, Sara. I really appreciate your thoughtful response.

I LOVE this so much! It’s so well written, so well articulated, and so profound. I’m immensely proud of you, Brandy. The journey you have taken to get to where you are and to become who you are has been hard, and you could have so easily given in to negativity but you kept on going and still do keep on going. I admire your persistence and the light you surround yourself with so so much. Congratulations on another great article!

Not me being emotional again, Shandy Pants! Thank you for your heartfelt response. I appreciate you.

There’s so much truth in this and so much bravery in sharing it. Thank you, Brandy.

Thank you so much for your response. I appreciate it.

Another beautifully written article! So profound and inspiring. I’ve read this one a couple of times over already. Well done Brandy!

Thank you so much, Kate. I really appreciate your lovely feedback. I’m so happy it resonates.

I loved this so much Brandy. It has such a beautiful flow to it. Your honesty has power to it, and the fact that you’ve reclaimed your power is inspiring! You’re right grief isn’t linear. I needed that reminder right about now, so thank you. And thank you for sharing part of your story with us. You should be very proud of yourself! ❤

Thank you so much for your lovely response. Interestingly enough, the main thing I realized in writing this, is just how proud of myself I am. Not only for being vulnerable enough to put it out there, but for the journey I’ve taken to get here.

Thank you for sharing your story and experience.

Brandy, I love this. I feel so much of this article within me.
I love the line:
“We are not what has happened to us, but how we choose to react to it”
It is so so true.

Thank you for writing this.
Take care

Thank you so much for sharing what resonated with you. It means a great deal that you took the time to do so. Be well.

Beautiful article Brandy !
it’s so profound and so inspiring
your story is just like the sentence “from poppies to butterflies”
the fact that you’ve been through all of this,but never gave up shows that you know how to find your inner light and that is #LevelUp
I’m really happy that you find your truth.
keep shining ,keep rising and carry on ❤

Wow, Dorin. You’ve touched my heart greatly. Thank you for the very kind things you said.

I read this for a first time last night and wasn’t ready to post anything. Re-reading your message of perseverance today was motivation I didn’t realize I needed.
Seeing you state how healing isn’t linear is eye opening for me, because now that I’ve read it I get it.
Therapy is a self care action that I will always be an advocate for. It changed my outlook for myself and my life. I am grateful that you have been able to gain tools to work through this mess called life… to work towards a freeing experience of being at peace and happy.

Thank you so much for sharing this with me, Elizabeth. That line was truly revolutionary for me too. I feel as though it makes the entire process so much easier, as there aren’t added pressures of various confines surrounding it.

Oh Brandy.. I could get lost in your words for days. This time around though, I felt like I was reading my own story up until a certain point. I haven’t been on this planet long enough to experience similar things you have in your adult life, but it’s words like these that make me go “maybe there is hope”.
Thank you for sharing a part of you with us.
May you always be on the inner quest – some probably familiar words.

Thank you so much for your kind words, Jenny. There is hope, absolutely! My therapist talks about that journey inward being called the hero’s journey. You are your own hero, is the message of that, and I’ve found that it’s absolutely true. When I realized nobody was coming to save me, and that I was who I would have for the rest my life- it flipped the entire script of what I thought life should be. It’s somehow even more magical this way! When you truly see the growth, and old limiting beliefs and thought patterns- replaced with hope, and accountability, magic happens! I wish for you, all your heart desires! ✨

I love the metaphor of “an old injury that lies dormant”, you tell your story really well. Thank You

Thank you, Erin! I really appreciate that! I feel the metaphor is what made it click for me, as I was able to finally see it, visually!

Thank you, Brandy, for sharing this. I saw a lot of myself reflected in your story, but I admire the way that you have worked to overcome your own obstacles. Your journey really struck a chord and has inspired me tremendously to work towards my own evolution in life. I applaud your bravery for sharing and also having the courage to make a change. Thank you again for your incredible words.

Thank you so much for sharing that with me. It truly means a great deal. I am wishing you every joyous blessing your heart desires.