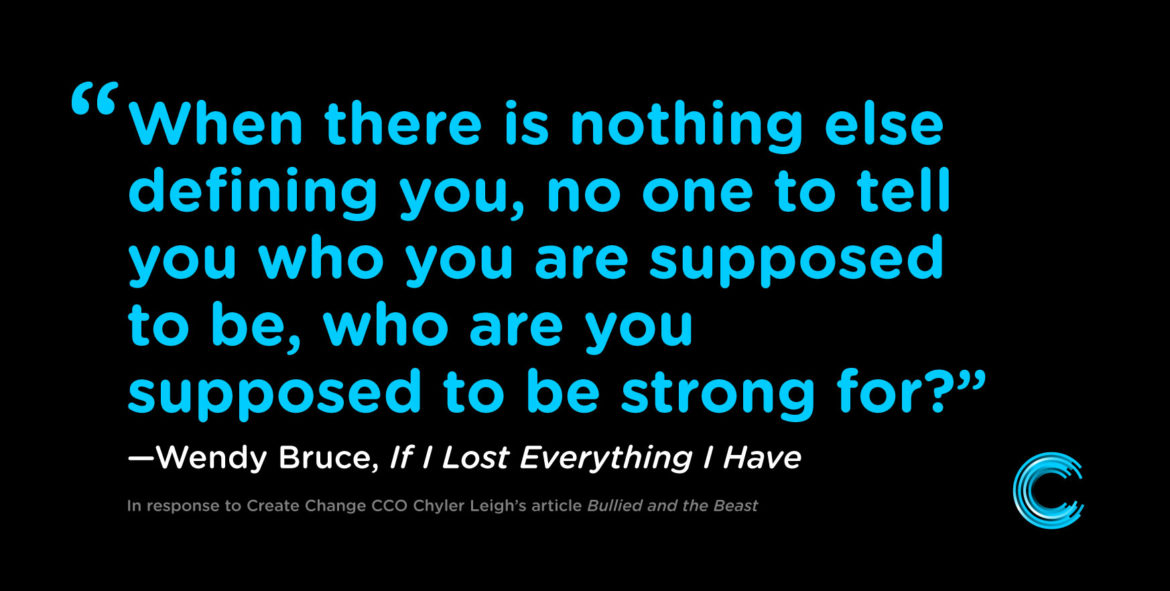 I’m not really sure how to begin here as I have never had a reason to tell my story before.  I’m hoping that by telling it some people may find strength or inspiration.  I think the easiest way is to tell it in the third person as, to be honest, sometimes looking back it feels like another person’s story.  So here goes…

There was once a girl who always felt the need to protect and help those around her.  She grew up with just a mum and one sister, and early on they were all quite close.  Her sister was always the type of person that drew a lot of attention from those around her, so the girl was just happy to sit quietly and help her mother deal with the storm of single parenthood.  She was always there for her sister, always there to help her mother, and this then grew to always being there for everyone in her life.  The kind one, the dependable one, and the one that was easy to take advantage of.  She learnt from this that to be liked you had to “fit in” with what people wanted you to be.  Like many people in high school, she tried to fit in and did what she thought others wanted, tried to be what others wanted, and invariably as it happens in high school, she was bullied for her differences. Sadly, this bullying just reinforced the message that you have to fit in to be liked.

Following her interests after school lead her in several different directions (as it turns out she was talented in anything she put her mind to).  Massage therapy, fitness and personal training, acting, singing, music – she excelled in all of them.  Discovering that people are intimidated by those they feel are “smarter” than themselves, she played down her talents and intelligence, again in an attempt to fit in and be accepted.  It worked…for a while.

She received several lead roles in community theatre and musical theatre, had repeated job offers for personal training and fitness instruction, and was asked to sing in choirs.  And, she did all of it; most at the same time.  Even though these were her interests, she never asked herself why she was doing these things. She was keeping herself so busy being there for everyone else that she didn’t realise she was giving more of herself than what she was getting in return.

She will never forget the day she was sitting for her neuroscience exam (for her Bachelor of Health Science in Musculoskeletal Therapy) and she had pain in her side all day.  By exam time she could not stand up straight, but she refused to go home.  She aced the exam and then spent the next three days in hospital.  A massive ovarian cyst had partially ruptured but, as it turns out, had not gone away.

The next twelve months consisted of trying to get doctors to believe her that the pain was still there and that there was still something wrong. This was unfortunately the same year she decided to take time away from studying science to follow her love of singing.  She was accepted into a twelve-month singing program which she was very excited to pursue as it was a dream of hers.
Once she found a doctor to listen, she discovered her right ovary had a cyst inside that was expanding to the size of a closed fist, and there were several other cysts forming on the right and left sides.  Still attempting to work in fitness and study singing, she spent many more months in constant pain on a surgical waiting list before having the promised surgery that would take the pain away.  It didn’t.

When she awoke from the surgery she was told that her organs were stuck together with endometriosis and more surgery would be needed in six months’ time.  Not only was she still in pain, but they were also going to use drugs to take all of the estrogen out of her body to reduce inflammation before the next surgery.  Which meant for the next six months she would continue to be in constant pain, and in drug induced menopause.  Needless to say, the disappointment from this news was devastating.

So, while she took a risk to take time away from her college degree to follow a passion, the timing could not have been worse.  The second surgery was in the same year she was still in her twelve-month singing program, and having your abdomen cut open twice in a twelve-month period is not at all helpful for your singing technique.  While she finished her singing program, she was in pain the entire time, completely miserable.  She could not learn as much as she needed to because you cannot sing when your abdomen is in constant pain and healing from surgery.  She decided to let go her dream of singing, as the disappointment of the whole thing was more than she could handle.

It turns out that after the second six-hour surgery on her abdomen she ended up with moderate nerve damage in her right leg, that has never completely gone away.  The nerve damage affected the feeling in her leg and a certain amount of muscular control, meaning the way she walks changed considerably. This then led to biomechanical imbalances that made her hips and lower back spasm, causing more severe pain and lack of movement.  Due to the weakness in her right leg, she had to stop cardio exercise and has not been able to run any considerable distance to this day.

Going back to pursue her college degree, she was still in some abdominal discomfort to go along with the leg and back pain, so it was back to the doctor.  The surgeons had not been able to remove all of the endometriosis in the last surgery so it was still causing problems, and now a large fibroid was growing in her uterus as well.  She was in line for her third surgery in a two-year period, while trying to complete the clinical component of her degree, where it is a requirement to treat and help others.  The stress of her final semesters at college, third surgery, moving house three times in three years, (the last move of which left her scared for her life, ending in a court appearance), having to change jobs three times in the same three years, and falling out with her friends who only wanted her for what she could give to them, left her completely empty and she had given up all hope.  Life had no meaning.

This was what you could describe as rock bottom.  She had lost her health, her ability to exercise and her friends.  She had minimal to no family support, an unstable living situation, had lost several jobs, and was in constant pain. She was ready to give up, and was actively planning how to end her life as she had nothing left worth living for.  This is the point where she was faced with exactly who she was and what she was really made of.  When there is nothing else defining you, no one to tell you who you are supposed to be, who are you supposed to be strong for?  She decided she would be strong for herself, and if no one else would…she would be her own hero.  She kept fighting.

When you do nothing but give to others unfortunately you can attract people who do nothing but take from you. She had defined herself completely by external things.  But, what happens when all of these things are taken away?  What are you then left with when it’s just you and when you need to decide if you like what is left?  When you become open to seeing yourself as who you really are it can lead you in unexpected directions that requires courage to follow.

While watching one of her favourite television series about a superhero, one of the characters showed her an insight into her own life.  She did not connect to the hero as much as to the hero’s sister, who had spent most of her life protecting her family with just a mum and sister, making her strongly relatable.  An episode where this character realised her inability to find a meaningful relationship with a man was because she was not attracted to men, and that described how the character came to this realization, was a huge eye opener.  She had never heard it described so perfectly. The character in the show had had very close friendships with women (that when being honest with herself were deeper that she realised at the time) all ending badly for stupid reasons, and  she had never really enjoyed being with a man, all of which could have been taken directly from her own life.

It had never occurred to her that the reason she didn’t chase a relationship with a man was because she didn’t want a relationship with a man.  When she first heard this on the show it was like being punched in the chest and she completely denied it, but the more she denied it the more it felt like she was being torn in half.  Eventually she gave it a lot of thought and was completely honest with herself.  She realised that it made perfect sense.  She finally understood herself for the first time.  She was gay.

The struggle of life never ends but when you decide to be your own hero things start to change. She is accepting of who she is which is a journey every day, and she is slowly rebuilding her body and fitness.  Her business is steadily growing, and she has found a wonderful group of friends who like her for who she is, not for what they can get from her. She realises her knowledge of what it’s like to be in chronic pain gives her an insight into helping those who are also enduring chronic pain in their lives.

So, if you have made it this far thank you for reading my story, and I hope it gives you some insight into who you are, and please ask yourself:  If I lost everything I have…who is left?  Because what you have is not who you are.  Be your own hero.

What are your thoughts on bullying? What have you done to prevent or stop bullying on the spot? How can we build a safe and inclusive school environment, workplace and/or community? Join the discussion on our FORUM in our Operation Orange discussion board.