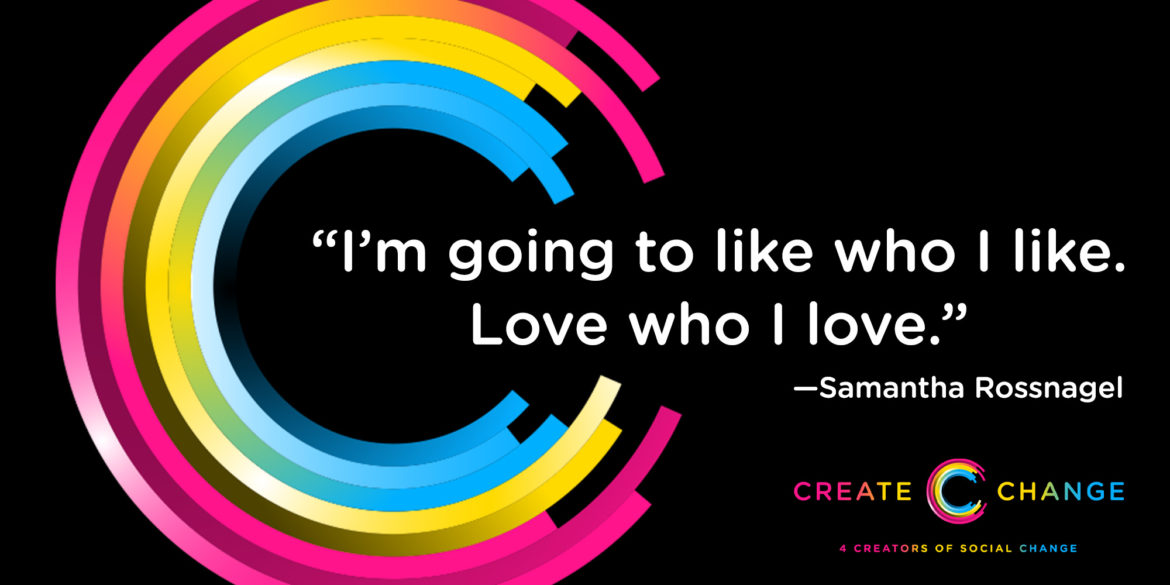 It’s taken over two years for me figure out who I am and for me to come out to my mom. And, I am still learning.

Actually, it’s taken my whole life to figure this out. You know what? That’s ok. It’s funny. Looking back, I see it. I see that I followed mostly women celebrities. Women I admired for who they were, their personalities as well as their looks. The ones I’d pull up and watch as much as I could of their IMDB pages.

Sure, there were one or two males thrown in the mix. That’s why if had to put a label on my sexuality it would be Pansexual or Bisexual, but for me the label isn’t as important. I’m going to like who I like. Love who I love. (For the record, if you need a label, use it and shout it from every corner. I will still shout, “Pansexual”!)

Admittedly, this all really started in my first year of college. There was this girl. She was very cute and I couldn’t stop thinking about her. We had this weird, complicated relationship that wasn’t quite friends but not enemies either. She was the type of person who could be sweet to your face but stab you in the back. She was the first person who really showed me that bisexuality existed.

Before this, I think the only show that I knew that had a lesbian relationship in it was Buffy The Vampire Slayer. At the same time I didn’t relate it to my life. In high school, there was a group of girls that I was always nice to and thought of as friends. But, looking back, it was probably more that I had a crush on them – something I couldn’t understand at that time..

Back to college…this girl, well, I knew she would never “like me” so I never acted upon it. We did talk about me being interested in girls. Then an incident happened and I lost focus on romantic relationships. And for a long time after this incident, I would think it turned me gay. (#MeToo). It wasn’t until years later that I would put together that I liked this girl before the incident.

After college I kind of forgot about it. I hit a rough patch with friends and wasn’t looking for anyone. It was during that time when I saw Alex Danvers come out on Supergirl. Everything I felt was put into words. I wasn’t comfortable in intimate relationships with guys. And, clearly, the two people I had feelings for in the past were women.

I’ve always liked the idea that I am going to love who I love, and I really wanted to have that attitude but I struggled with two things. 1) My mom didnt believe in bisexuality or that I was gay and 2) I thought I needed a label.

I went to a gay convention back in 2018 that would forever change my life. I went for one reason but came back with three or four amazing reasons to keep going. I met people who accepted me, for whoever I was. I felt like that was my coming out.

This past year, I went to that same convention and heard a speech from a wonderful woman. Someone else who just loves who she loves and doesn’t necessarily need a label. It was that day that I was ok with both embracing being Pansexual/ Bisexual and also not embracing the label as well.

I returned home from that trip and came out to my mom with those exact words, “I’m going to love who I love.” Though a part of her doesn’t believe it, she said she’s slowly warming to the idea. That was truly a turning part for me. Most people knew how I felt. But I couldn’t broadcast it for the fear of someone telling my mom. But, at that moment I didn’t care. She knew, and they couldn’t say anything she didn’t already know.

At the time when I really needed to hear it, a special person told me it’s ok not to know who you are. Those simple but wise words were so helpful, and I really began to just be me. It may have taken another two years but for the most part I finally feel that I AM being me.

I am exactly who I am supposed to be. I’m not perfect. I’m not straight. I like women and I could also like a guy one day. Whatever happens will be.

Whatever your story is, be every color you are.

What do you think about labels? Do you like to be defined by one, or are they unimportant? Please visit our FORUM to share your thoughts.