Written by Leah Rudd in response to Create Change CCO Chyler Leigh’s article ‘Bullied and the Beast’. This submission is significant because it speaks about bullying within the EOE community, and since EOE is so closely tied to Create Change it is particularly meaningful. 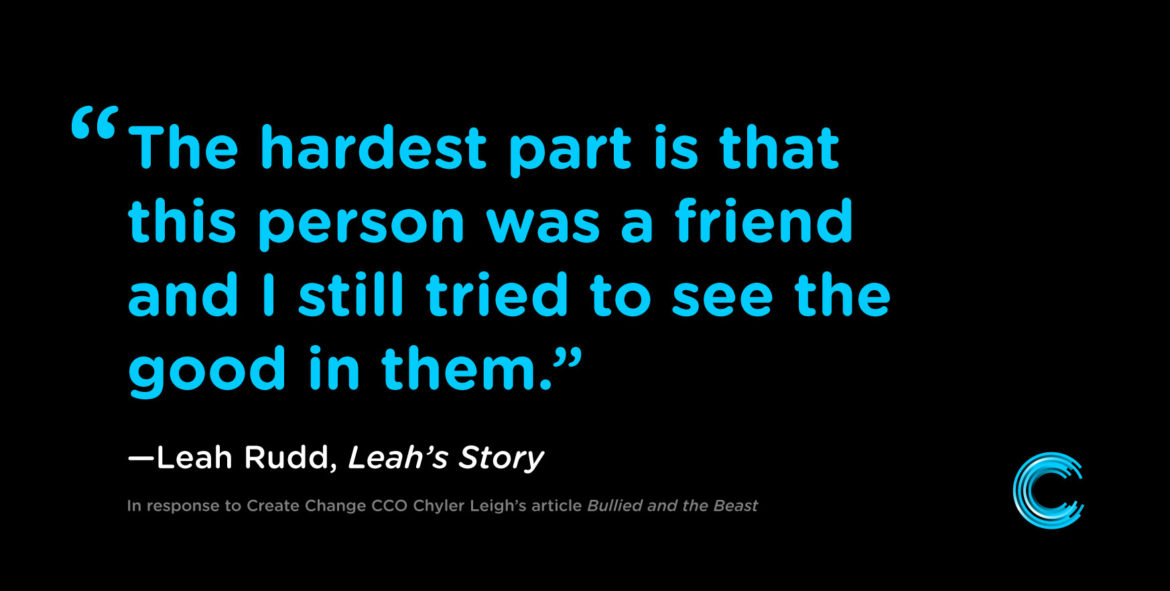 I don’t know why this has been so hard for me to write. I have so much to say on bullying. This is something that has affected me since a very young age, whether it was at school, at home with family, or very recently within the EOE family. I wouldn’t necessarily say I’ve overcome the bullies in my life. I’m still learning to cope with the effect they’ve had on me. It still happens at home; that’s something that unfortunately will probably never change. However, I will talk about the bullying that’s happened within the last year; what happened and how it’s affected me, because recently bullying within the community has been a huge topic.

Everyone tells me now it’s about jealousy. When it first started at the Europe shows last year I didn’t tell anyone, hoping that it would all just stop and this person would move on and leave me alone. I can see now that it is about jealousy, but at the time being attacked for being me, being kind, being respectful and for how “well-known people” spoke to me, I just couldn’t understand what I’d done that was so wrong to warrant such behaviour.

The hardest part is that this person was a friend and I still tried to see the good in them. Things started getting worse when they realised a particular person with a “Blue Tick” on their Twitter profile followed me. I got numerous messages about how I didn’t deserve it, it shouldn’t be me, it should be them that gets the follow. The messages weren’t too bad to start with, and were easy enough to open and ignore. But things started to get worse the more I ignored them and every time two particular people happened to like, retweet or reply to a comment.

It got to a stage where I was threatened to be attacked physically even if it was at a show. I was told I should kill myself as it would make everyone happy. It was taunts on top of taunts. Add this to also getting emotional and mental abuse at home and it was a lot to handle. My mental health was spiralling down a dark path but yet I still faked a smile and pretended everything was ok, to everyone.

I’m always hesitant to make friends or talk to people in fear of something bad happening, but at the Vancouver show I met some pretty amazing people who are now my family. We call each other “Ohana”. One of them brought up how the person who was bullying me was also doing it to someone else and when they confronted this person their reply was, “ I get a kick out of bullying people.” That’s when I got the courage to open up to my new friends about how this person was also bullying me. The love and support I’ve had from them was and still is amazing. They wanted to tell a particular two people about it, but I was adamant they couldn’t find out because I didn’t want to cause any trouble, or have them burdened with my problem.

This person still carried on with the messages about how I should die, how I’m not good enough, how I don’t deserve things. It got to the point where my anxiety and depression had never been so bad. I would rather have ended my life than carry on living. One day in September I was on the edge. I couldn’t see a way to carry on. But, someone special reached out to me. She was the only one to do so that night. I didn’t go into detail about why I was feeling the way I was because I didn’t want to be a burden. But her words stuck with me, “You’re a friend; I’m here no matter what.” She didn’t have to send messages or check up on me but she did. She kept telling me that I was loved and that I matter, amongst other things.

But I just couldn’t believe any of these things that she and also my other friends were saying, because how could I when I had this person and my own family telling me how life would be better if I didn’t exist, or that I’m not enough, or that I don’t matter?

My friends had had enough of a particular person’s behaviour when it stopped me from going to an EOE show out of fear. When the bully proceeded to badmouth me to other fans at the show, my friends went against my wishes and exposed the person who was doing the bullying to two “well-known people”. I know my friends were coming from a good place but the fear I had in case it all escalated and the bullying got worse was horrendous.

But, all of a sudden after Vegas things just stopped; all messages; everything; which was good but also unnerving. But, the damage from the bullying had already been done. My mental health was at the lowest it has ever been. Each day was getting harder and the things the bully said were ringing in my head constantly.

After I got back from the EOE show in New York in October, I just couldn’t take things anymore and I tried to take my own life as I couldn’t see another way of carrying on. I’m thankful now that I didn’t succeed as it opened my eyes that I couldn’t carry on the way I was. I started attending my therapy sessions regularly, taking my medications daily, and slowly opening up to my friends letting them in.

So I wouldn’t say I’ve overcome the bullies, but rather I’ve learned to live with the bullying.

What are your thoughts on bullying? What have you done to prevent or stop bullying on the spot? How can we build a safe and inclusive school environment, workplace and/or community? Join the discussion on our FORUM in our Operation Orange discussion board.