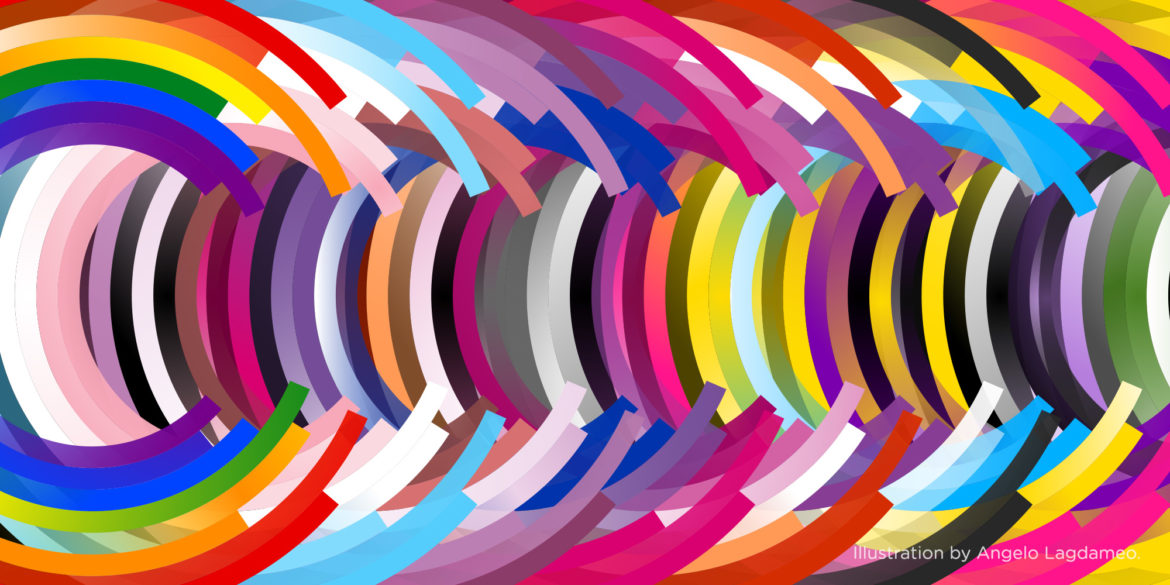 June is the month we celebrate LGBTQ Pride. To honor this important time of year, we asked our Create Change community to send photos, artwork and brief essays sharing what Pride what means to them. We received many beautiful and thoughtful submissions, some of which we’re sharing below. We hope you enjoy them as much as we have. 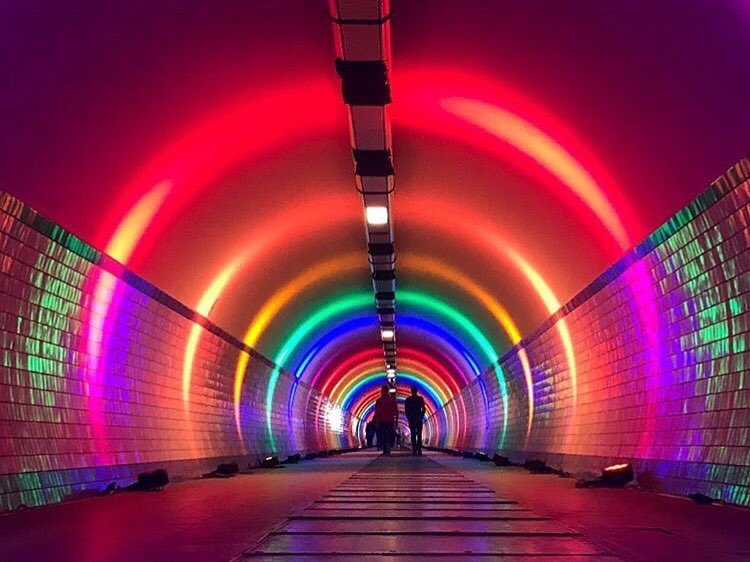 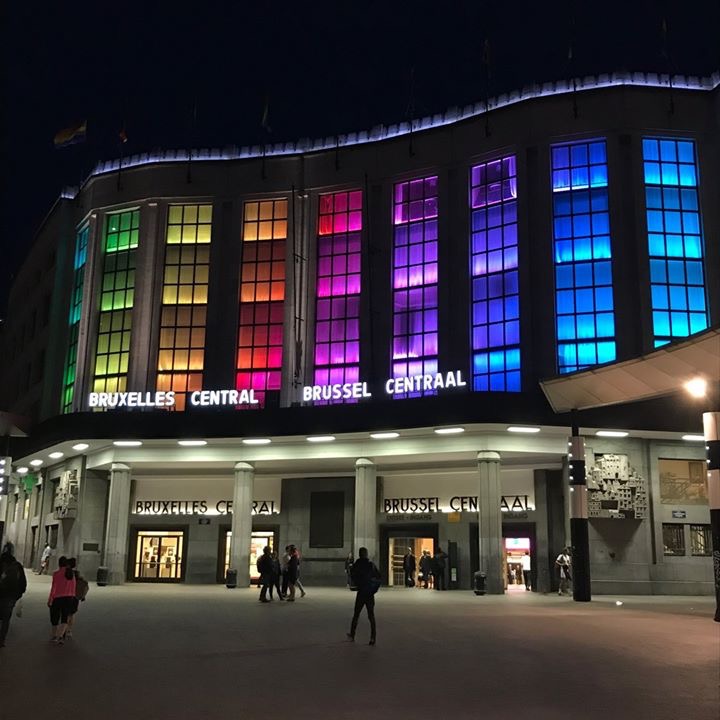 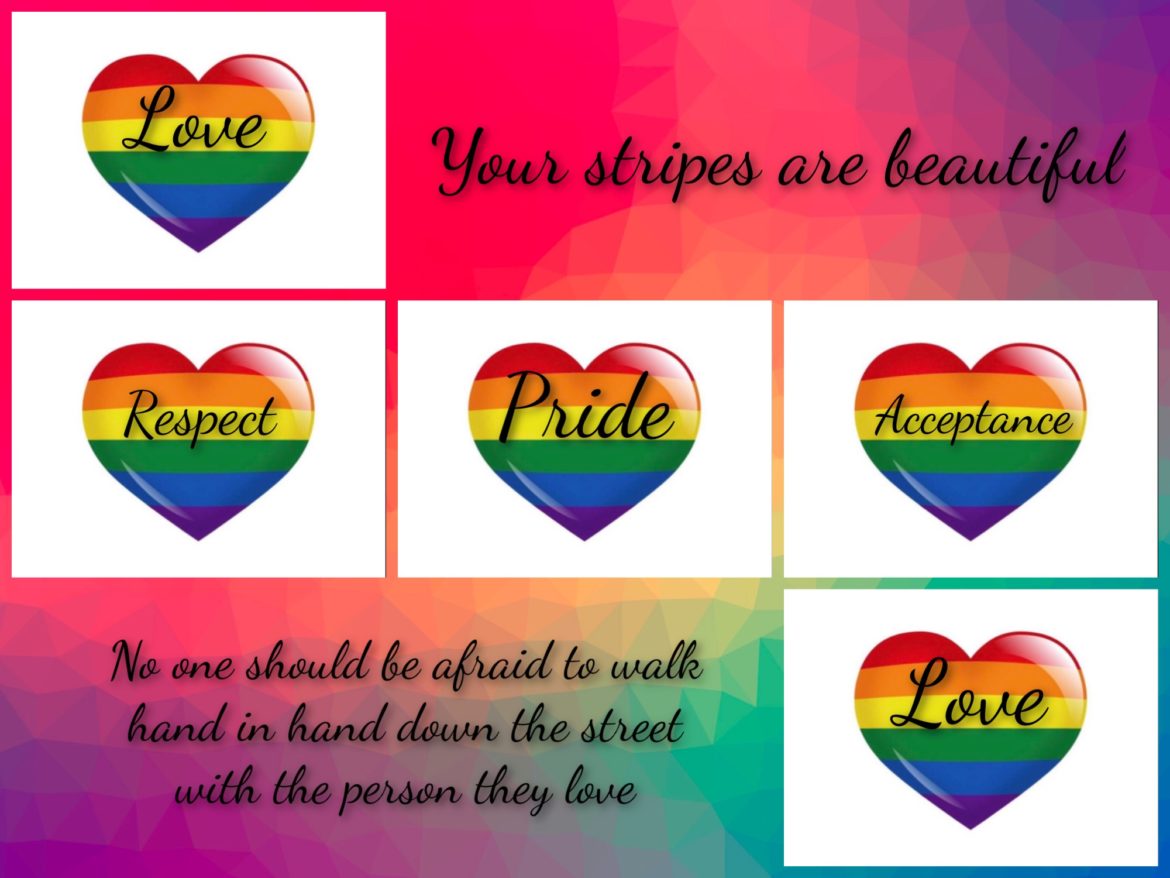 Nancy says she’s lucky to live near cities that are happy to celebrate Pride. Rainbow Tunnel is one of her personal favorites, capturing the pedestrian tunnel in Antwerp, Belgium. In addition to her photography, Nancy also sent in this lovely artwork she calls Rainbow Hearts. 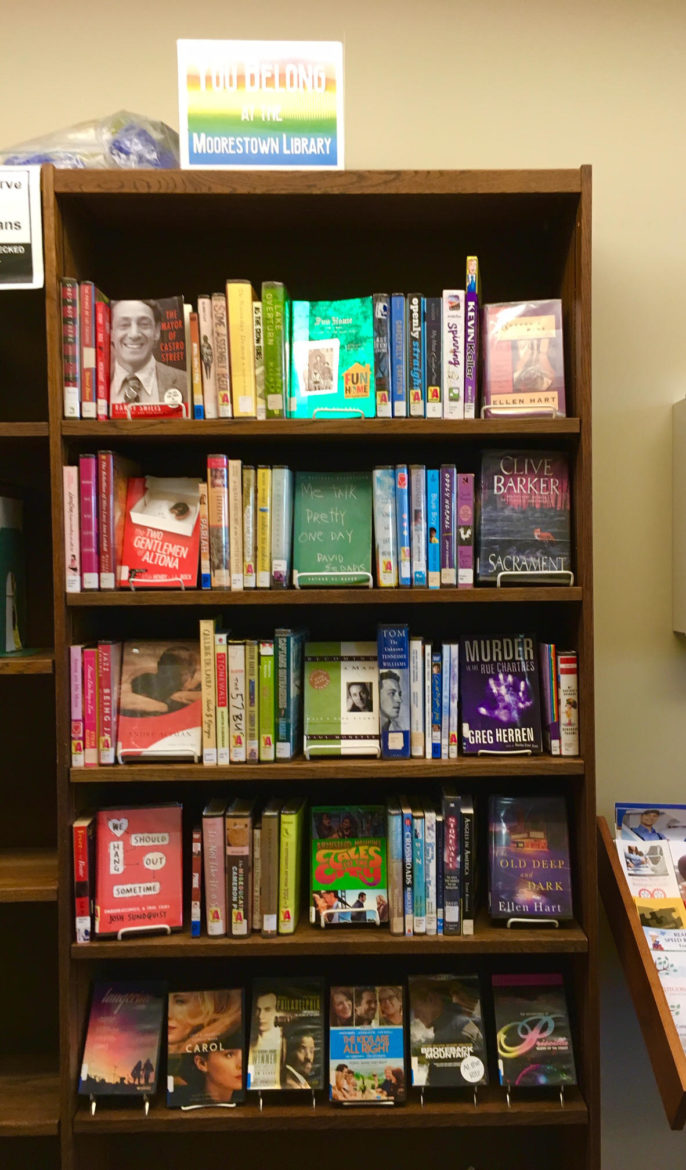 Joanne created this Pride display at her local library, the first one of this kind they’ve ever had. 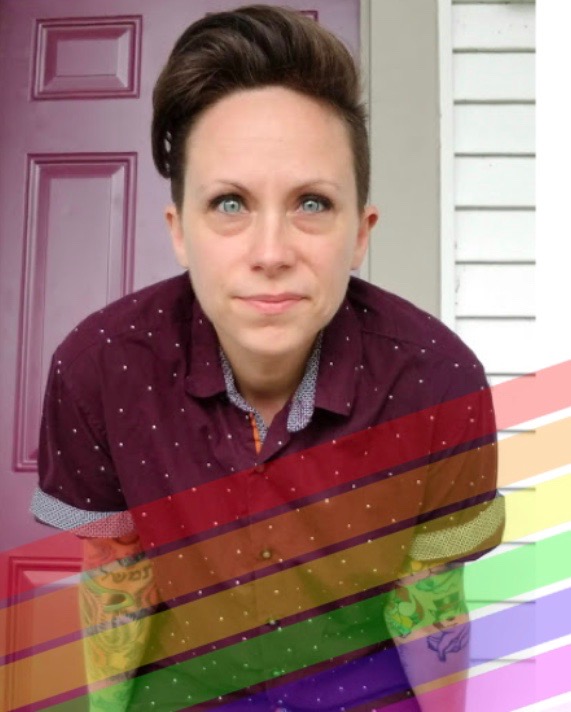 I was born and raised a good ol’ southern Baptist. I didn’t even consider that I might be gay. Not only would it not have been accepted, it wasn’t even in the cards. Although I have come to realize I struggled with sexuality and identity most of my life, I didn’t recognize it until I was in my mid-twenties. Even then, it wasn’t until I was twenty-seven that I finally dared to step into the ring. I had to wrestle with my faith and sexuality.

I have seen from many perspectives. I understand the struggle from many sides. There are many things I’m unsure of, many answers I don’t have. But I believe in love. That is all I know.

It has taken a long time, but I have pride. It certainly came with struggle, but that has made me who I am today, so I am grateful. I am happy, I am free. I am proud. 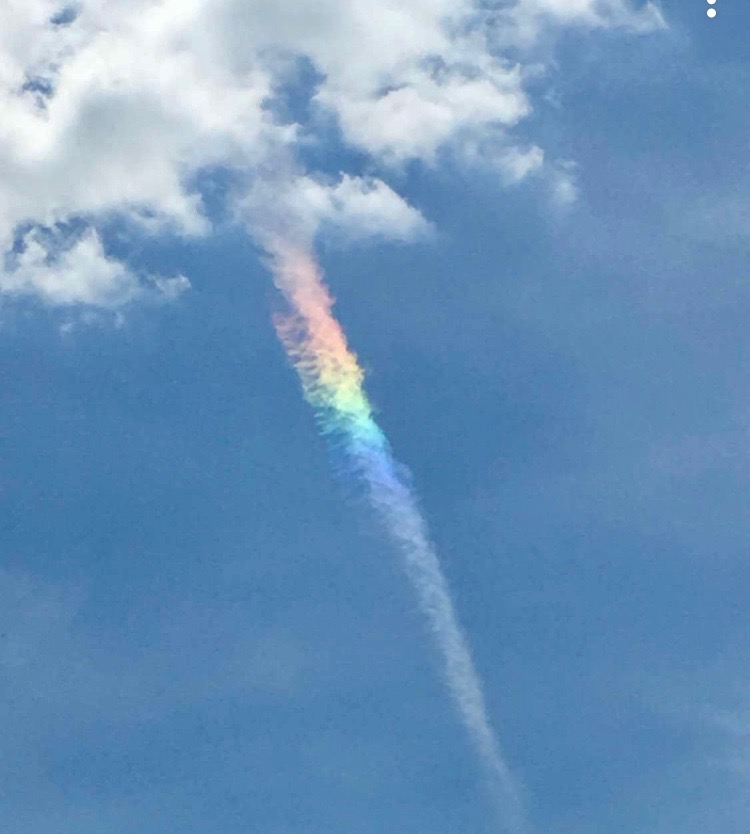 After some very rainy weather in her area the skies cleared up and an airplane flew overhead shortly thereafter, creating this vapor tail. As Jill says, “Even Mother Nature believes everyone should just be who they are.”

In Pride month, while much is now spoken about in regards being transgender, one aspect is still woefully understood or not spoken about. What happens if the transgender person lives with someone else as a partner/significant-other/husband/wife, and how does it impact the relationship?

In my instance, it was both the easiest and the hardest thing to deal with. The easiest was confronting my (now) husband on the need he had, the discussion was something that had to be brought up. I wanted and needed him to be himself, in all facets of our lives. The hardest thing was having to suddenly take four decades of my life and flip it on its head.

We were about to go from being a recognised lesbian couple to effectively a heterosexual couple for those on the outside looking in. My identity had to shift to bisexual, something that I knew had to occur. It wasn’t difficult per se – but it still took some repositioning of thinking on my part. Despite the unknown, we knew it was the best decision for us both.

Sadly, I also know for many it destroys the relationships. A dear friend, who is a transgender woman, lost not only her wife but children, with huge amounts of hatred from them being flung her way. Even now that loss still cuts her deeply. Yet she couldn’t hold back on the need to go through the process. Her parents were no longer alive, but she knows that would’ve been another loss to her.

We all have to be mindful that when we talk about transitioning, sometimes the significant others get forgotten about. Strangely, parents and siblings of those who transition are often acknowledged. Partners and children less so – at least in my own experience and in talking with other transgender people. We also face barriers if we need support through the process. Again, it’s usually offered to parents and siblings. Partners and children not as much. It means some don’t transition, or if they do they sometimes risk losing stability given by their partner, because the partner has no-one to turn to.

I know I’m fortunate. While certain mindsets had to change for me on my own identity, I was happy to ensure the conversation went ahead. I don’t feel anger, but rather relief knowing my husband is now far more himself. It isn’t perfect (some dysphoria remains as health issues limited some surgery), yet he now passes as a man and our relationship is as strong as ever. Possibly stronger. I just acknowledge that not everyone is as fortunate, and we have to be mindful that transitioning is often a fraught process that requires more adjustments than some might realize.

Not Another Pride Story—from Petra Matas

I moved away when I finished high school. I moved across the continent and finally started living free, living as me. Summer came and Pride celebrations were everywhere. I refused every invitation I got to go. However, after hearing that I’ve never been to Pride (a lie I’ve told so often I sometimes forget it’s not true) my friends were not taking no for an answer. They picked one of the smaller events that were close by as they wanted to ‘ease me into it’ – their words.

I packed and unpacked for the weekend hundreds of times. I had excuses not to go lined up. Ultimately, it was my housemate who made me go by physically grabbing my hand and dragging me out of the house.

When we got there, I immediately noticed that the police presence wasn’t high and there were very few barricades. I was glad that I had my own protection – a knife and pepper spray.

The parade started. I held onto my housemate, afraid to be left alone. It was warm, everyone was happy and carefree. This was a celebration. I couldn’t stop fidgeting, thinking back to the first Pride I ever attended in my hometown.

It was the polar opposite.

Barricades were everywhere, a special unit of police was lining the entire route we were about to take. I had just come out to my friends and had my first girlfriend. It was a sunny day and both my girlfriend and I thought the security measures were a bit much. The group that had gathered for the event was small, but they were friendly, and all looked excited to be there for the first Pride in our city.

The march started and it wasn’t long before we ran into trouble. People, mostly men who are fans of the local football club, were at the barricades spewing hate. Some tried to get over the barricades and block our path. I held my girlfriend’s hand and the entire group started walking just a little bit closer. We paid no attention to the insults thrown our way. The further we got the bigger the crowds of protesters were. Random insults turned into full blown chants ‘Kill the queers’ was the most popular one. First punches were thrown, but the police seemed to have it under control.

Still, there were only a couple of hundred of us and reports were coming in that the mob on the other side was close to 10 000 people. We continued with the sounds of the police helicopters flying over us. As we approached the location of the stage and food stands, we found ourselves surrounded by barricades and angry mob from three sides.

They were armed, ready to throw things at us. It started with bricks and stones. Police did their best to shield us, but the projectiles made it through. I saw one of the parade participants go down and I ran holding my girlfriend’s hand, pulling her with me. We did not make it far as bricks were replaced with dirt, lighters and whatever else the other side could get their hands on.

A loud bang, a flash that blinded me. Panic. Someone pushed us. We were on the floor. I was choking. As my eyes recovered from the flash, I realised we were surrounded by smoke. I grabbed my girlfriend’s hand once again, pulled her up and ran towards the music and the stage. Several more bangs followed, insults from everywhere, more projectiles and finally tear gas.

We never made it to the stage.

Police made a quick decision to get us out of harm’s way and into one of the closest LGBT group’s’ offices. Ambulances took the injured while we all sat through several long speeches from the organisers. Not a single soul seemed to be present, not many clapped or really listened. We were only there because police were trying to find a safe way of getting us home.

The entire time I held my girlfriend’s hand. I couldn’t let go.

I am not sure how long we were there before we were all made to go into police vehicles and were escorted home. Several of us lived in the same neighbourhood so we had the ‘privilege’ of riding in a van they use for prisoner transport.

I didn’t leave my girlfriend’s apartment the rest of the weekend. My cousin had to pick us up and drive us to where she had left her car prior to the parade. I didn’t walk anywhere for a month.

I decided to never speak about it. And I never did. Until now.

One of my friends was one of the organisers for Pride back home this year. There was a live feed and I decided to watch, just to make sure everyone I cared about was safe. It’s only a few years later and there were barely any protesters, no one got physical, just an odd insult.

It was warm and happy. It was a celebration and not a nightmare. It got better.

I did make it through my second Pride with a lot of help from my friends and housemate, and years later I attended another Pride with my housemate where I was less of a nervous wreck, freer, and more me.

And next year I am planning to go to Pride in my city. This time I am confident that I will be safe. 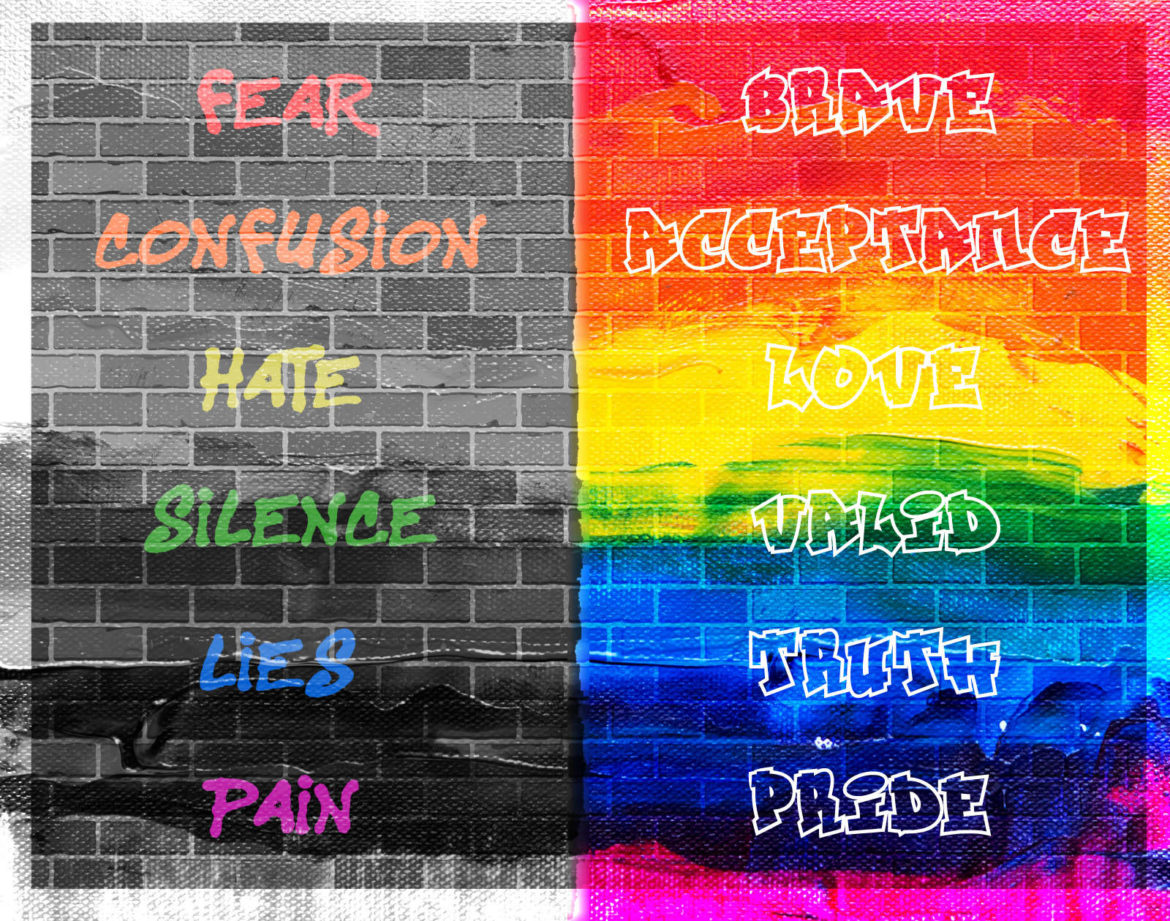 This is a wonderful collaborative artwork submission from husband and wife, Steven and Sara.