Create Change interviews Klare Rufo. Luke and Klare Rufo are a British husband and wife filmmaking team. Their latest project, Perfectly Frank is a story an 18-year-old agoraphobic, Frank, who lives alone with his granddad. Frank imagines the world as a 1950’s musical as he attempts to overcome a variety of anxieties. 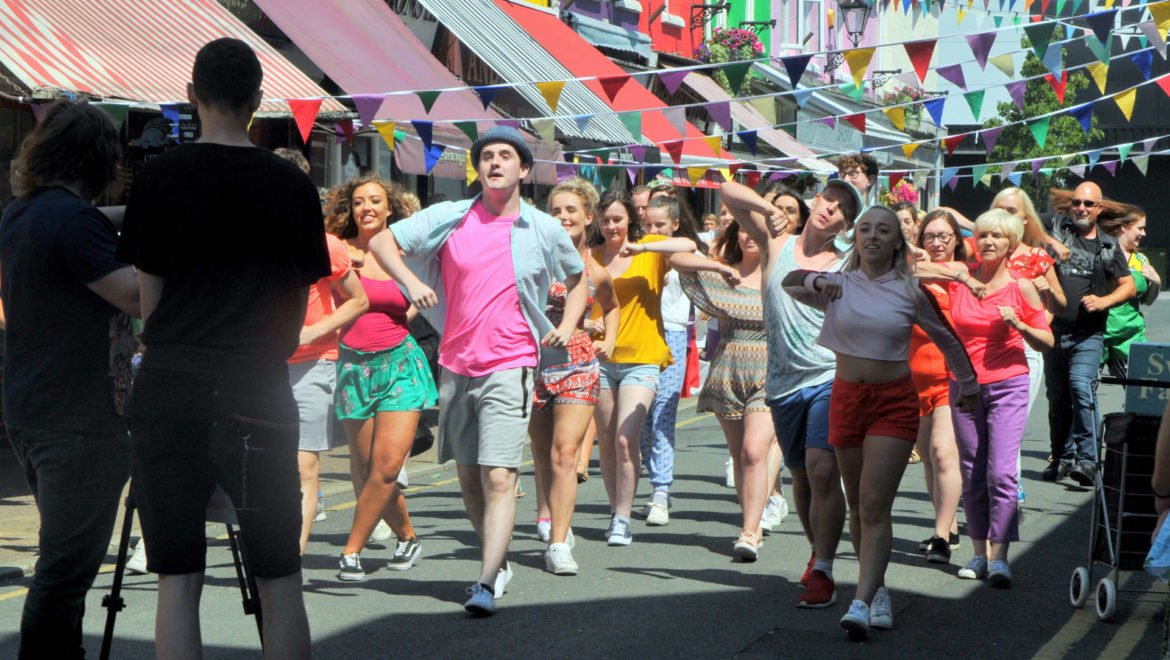 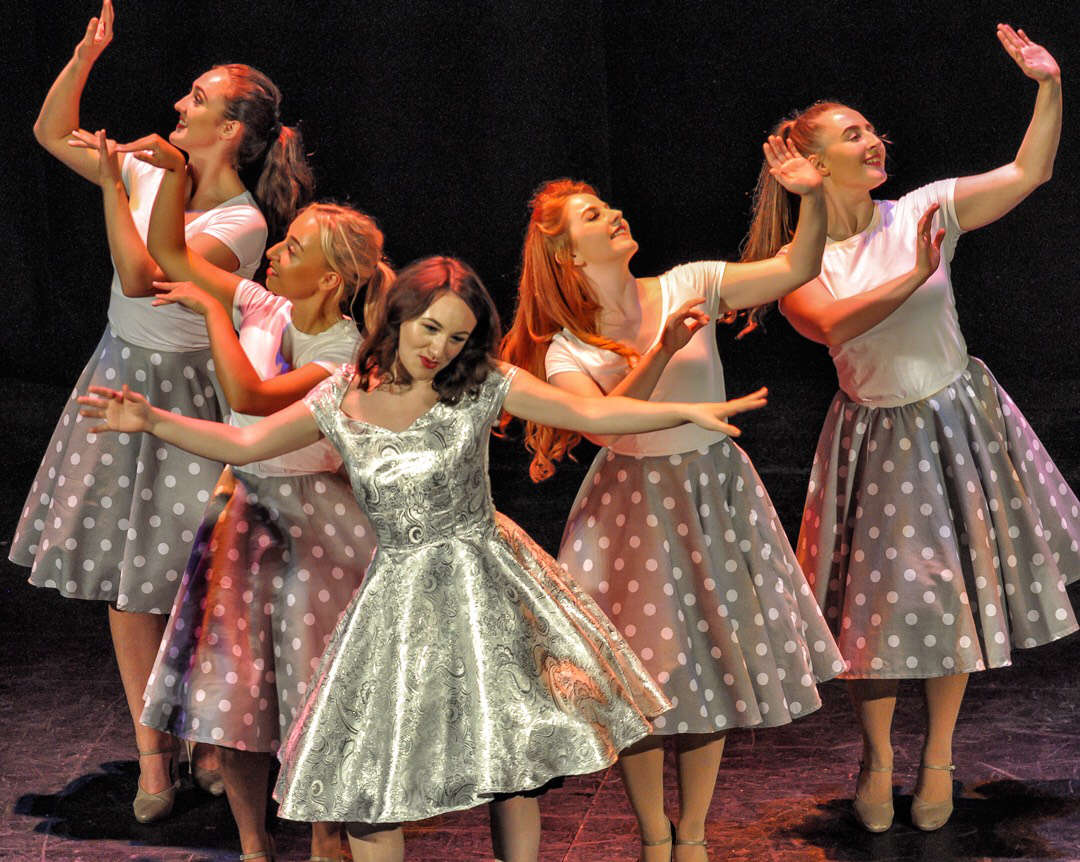 Daisy Gill as Lily, in one of the film's many musical numbers 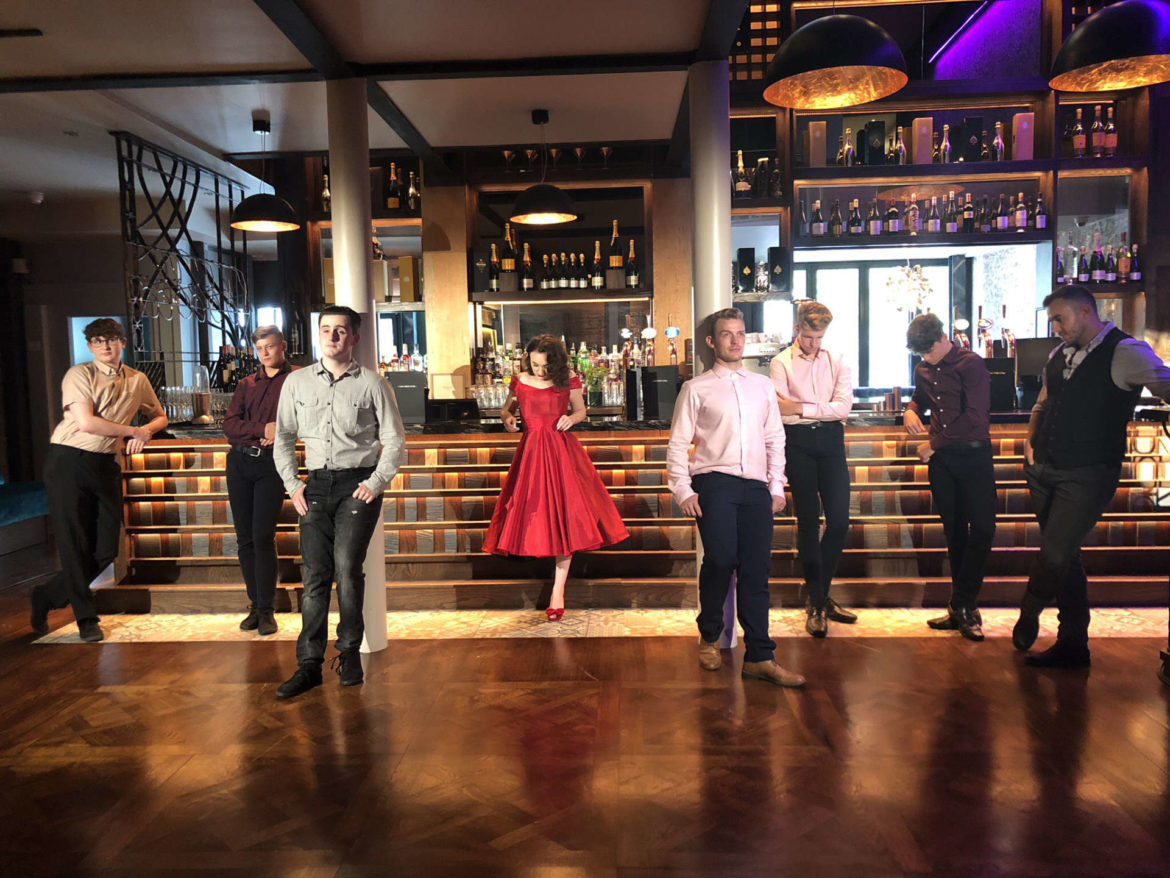 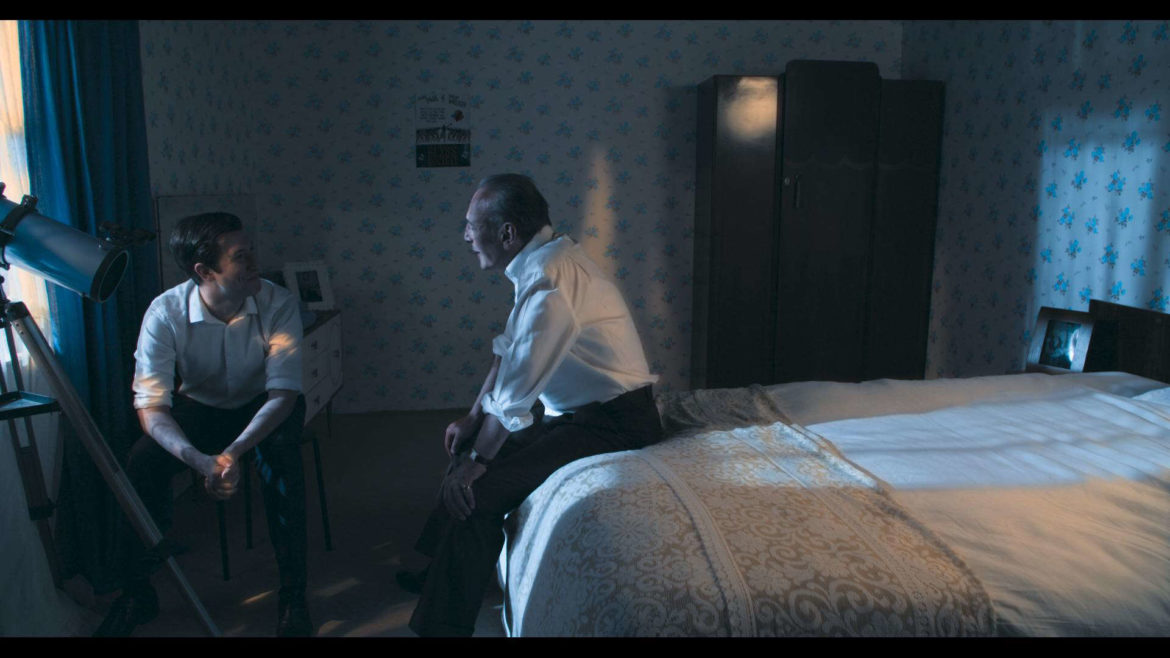 The relationship between Frank and Grandad is a special one indeed 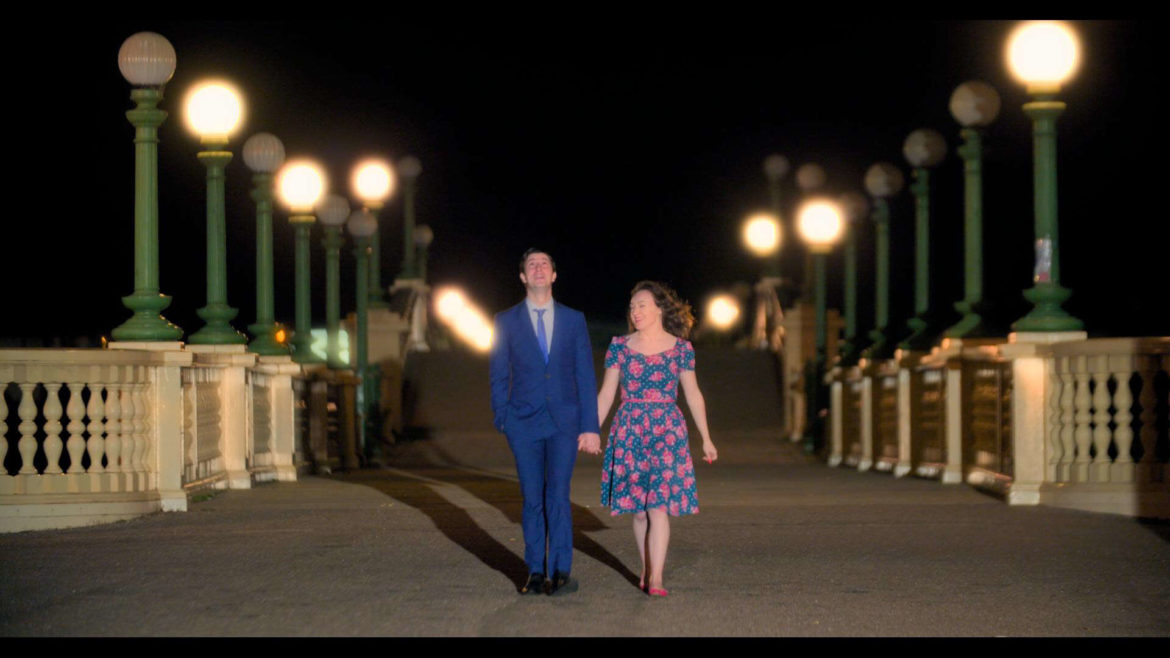 Frank & Lily on a special evening out

At Create Change we believe that meaningful change is created by visionaries who can capture the hearts and imaginations of people. That’s exactly what British husband and wife filmmaking team Luke and Klare Rufo have done by removing the stigma surrounding mental illness, something we feel very strongly about here at CC.

Written and directed by Luke and produced by Klare, Perfectly Frank is a story about 18-year-old Frank, who is agoraphobic and living alone with his granddad. Frank imagines the world as a 1950’s musical as he attempts to overcome a variety of anxieties.

This film, a genuine labor of love, was made on a shoestring budget and with an entire community of devoted artists. As Luke says, “Perfectly Frank has been a project of love, friendship and determination…. the film is all shot in 2K and the equipment was hired free of charge from ProVision in Manchester….So many people gave their time and money to make this possible! One musical number we did in Hesketh Park saw almost 500 extras turn up in 50’s clothes, all having pre-learned a special dance online! The film has taught us one fantastic thing – that the world is full to the brim of beautiful, kind, supportive people.”

We really admire the creative and sensitive approach the Rufos have taken in telling a story about this important issue. Perfectly Frank is currently being submitted to various film festivals, and we recently had the opportunity to interview Klare Rufo about this passion project, which locally gained the nickname of “the little film that can”.

What was the inspiration behind Perfectly Frank?

Luke wrote perfectly Frank (originally called Teatime with Granddad) about 10 years ago and it’s fictional. He did a huge amount of research specifically on autism to help build the character of Frank, although we never actually label him as autistic within the film. We do refer specifically only to Frank’s diagnosis of agoraphobia and it’s resulting social isolation. The love and admiration of Frank for his granddad and their beautiful relationship is based upon Luke’s relationship with his own wonderful grandfather.

Why was it important to both of you to tell this story about mental illness?

We all have struggles and difficulties and each of us find sanctuary in many different ways. For us and for Frank the romantic era and music of the 1950s provide a purer and simpler way to see the world, therefore easing Frank’s anxieties and helping him to process the complex world around him. We wanted to show one way that people respond to challenge in their lives and highlight how beautifully life can be perceived if we want to see it that way.

How were you able to get so many people involved in your film, both as part of your filmmaking team, and also as extras in some of the scenes?

We asked! We are blessed to be surrounded by so many talented friends and family. Our musical composer/director, choreographer, associate producer and first AD are long standing friends. The rest of the crew and cast were found using our Facebook page, local film makers meetings and open auditions. Our Facebook page and Twitter account were such a help as people shared and shared. Our first snippet of the filming post got almost 26,000 views, with our official trailer reaching almost 50,000 views! We became absolutely overwhelmed with how many people fell in love with the story and the fact we were actually doing this! Raising so much via our GoFundMe account and the sheer amount of free venues, manpower and in-kind support we gained was truly extraordinary!

Did you intend for the film to be a musical from the very beginning?

The script wasn’t always a musical. It was originally written to use animation as the escapism part of the story. Musicals are something Luke and I love together and we exchanged the animation for musical numbers instead. We think the effect is amazing.

Perfectly Frank includes ten original songs, most of which you and Luke co-wrote the lyrics for. What approach did you take in writing the songs together?

It’s true that the film has ten original songs. The melodies as well as the beautiful score were all composed by a good friend of ours, Martin Gratton. Our approach to writing the lyrics was to look at them as poems. We would take a stab at a verse and chorus then pass to the other person for them to see what that inspired. In the end all nine songs were a mix of mine and Luke’s words and we couldn’t tell you who wrote what after so many revisions! The tenth and final song (which we’ve used for the end credits) was written both musically and lyrically by Martin as he was inspired to do some lyric writing which he’d never done before. The outcome is incredible!

How did you go about casting the film? Did you have specific actors in mind or did you go through a rigorous audition process?

For the three main characters we created character profiles and then shared them everywhere! We were supported by the Creative Education team at the Liverpool Empire (a huge theatre in Liverpool) who allowed us to use their space free of charge to hold open auditions.

Connor Simkins (Frank), Daisy Gill (Lily) and Geraldine Moloney- Judge (Mrs Jones) were found this way. They are all fantastic and they embody their two characters so beautifully. We met David Knopov (Grandad) in another chance of fate. He’d seen the adverts we put out everywhere for auditions for the film “Perfectly Frank” and to be honest he was a little taken aback as this is the name of his Frank Sinatra tribute act. Luke and I didn’t know this. David contacted us to ask if we could change the name of the film. At this point we still hadn’t cast Grandad so Luke suggested he may be interested in casting David, and the rest as they say is history.

We are lucky enough to have a couple of long standing friends Marie Crichley (Dr. Rachel) and Jim Mair (Policeman) who already work in TV and film. Marie volunteered her services as she loved our get-up-and-go. We held some auditions for the smaller roles via Skype, video submissions and applications.

What were some of the challenges you encountered while making Perfectly Frank?

There are so many breathtaking scenes in the film that are amazing to watch but that also presented an unbelievable technical challenge too. One of Lily’s (the female love interest of Frank) songs was filmed in one continuous shot, and was sung live on a street in Liverpool. Her performance is raw and so beautiful. One of the songs had over 480 extras in a park including gymnasts, cheerleaders and a brass band. There was a scene shot on a beach during the golden hour (sunset), which were the fastest 40 minutes of our lives, and another scene was shot on a pier at midnight in 30 mile per hour crosswinds! The list goes on and on.

Do you have a favorite scene in the movie?

There are so many we love. For me personally, it’s “The Day That I Met Her”, which is the park scene. It’s a flashback to the day that Grandad met Nan and is an unashamed celebration of how he felt to be in love. With so many extras all dancing, performing and singing it feels as though the whole park came alive just to celebrate the fact that they found each other.

What’s been your favorite and/or most surprising reaction to the film so far?

People have loved the film, it’s made us smile how people have been genuinely surprised at the final outcome, as really only a handful of us knew how the entire jigsaw fit together. For many participants, seeing their bits assembled as part of the whole came as quite a shock. So many people were surprised at how funny the film is in places, but everyone’s overwhelming reaction is love for the three main characters and their story.

Ultimately, what message do you hope the audience will take away after watching Perfectly Frank?

This musical is hopeful and also very raw, real and so, so sad too, but the overwhelming emotion we were going for is hope. We could have made a zombie movie or gangster film but Luke and I are positive people and wanted that to shine through, with two amazing children (Callum who’s just turned 21 and just finished Uni and Raphael who’s 5 and spent every weekend on set – our mini producer) and an array of exceptionally talented and wonderful friends who helped us every step of the way. We know how blessed we are and wanted to bring this positivity to the silver screen.

Thanks so much for sharing your story with us, Klare. We really admire what you and Luke have done in creating a moving film about mental illness. Do you have any final thoughts you’d like to leave with our Create Change community?

This film is entirely possible due to the amazing kindness of people, some known to us and some not but all invested. We have a number of beautiful stories connected to the making of the film too: a mum of a soldier who died in service allowed us to use her son’s grave as a film location. Her reason was, “He would have loved this, loved you guys. What you’re doing is impossible and yet you’re doing it anyway”. Her son was a get-up-and-go character and she knew if he’d still been alive he would’ve been involved so she wanted to honour that.

We’ve entered the film into a couple of big film festivals and hope to secure some support that way. In addition we are seeking promotion and distribution ideas for the film also. If you would like anymore information please visit our Facebook page and do not hesitate to get in touch with us at https://www.facebook.com/perfectlyfrankmusical/. Thank you.

How can we provide support to artists like the Luke and Klare Rufo who are using art to tell stories about challenging issues like mental health?  We’d love to hear your thoughts. Visit our Create Change Articles FORUM.